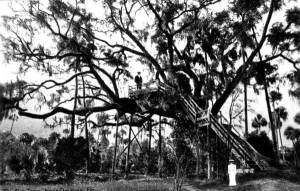 One hundred years ago, three stories high on a dancing platform in the branches of South Daytona’s “Big Tree,” young ladies swayed in festive dresses, dancing with their beaus to fiddle music atop the 800-year-old tree that gave Big Tree Road its name. At the time, the rural community was known as Blake, and for many years locals and tourists would trek to this ancient tree that merited hand-colored postcards. Clark Jewelers of Daytona even arranged for commemorative plates of blue and white design to be made in Britain (Graham, “Dances”).

Estimates marked this live oak to be 1,000 years old–some said 2,000; and towering more than ten stories, Big Tree sported a girth of 36 feet with its monstrous limbs spreading at least 157 feet, covering a full acre of ground beneath it. Apparently, no live oak tree in Florida today matches South Daytona’s historic Big Tree because as of 1987 the largest live oak was not Ormond Beach’s Fairchild Oak, but instead, Jacksonville’s Timucuan Treaty Oak with a circumference of only 27 1/2 feet at the height of 4 1/2 feet from the ground, and it had a height of 90 feet with a limb spread of 151 feet (Atwell 21; “Big Tree”; Graham, “Hunt’s”).

Square Dancing 30 Feet Up in the Big Tree

Square dancing was especially popular in the Big Tree after 1904 when William Williamson built a 14-foot by 16-foot dancing platform (referred to in those days as a “casino”) at the top of extended flights of wooden stairs with railings. Williamson, a native of Ohio, lived in Blake for ten years, growing citrus; and years later Williamson Boulevard was named for him (McLaughlin).

Local fiddler Joseph Shipes kept the toes tapping for the six couples who could dance on the elevated rustic “ballroom,” and according to his descendant Irvin Shipes, even after the tree was destroyed, leaving only the base of the tree, people gathered to dance on the giant, level stump of Big Tree (Graham, “Dances”).

The Big Tree and a Spanish Land Grant

The towering tree had been a landmark for hundreds of years, so Brian McLaughlin, Vice President of the South Daytona Historical Society, noted in his lecture about the Big Tree that it was likely a ceremonial gathering site for Native Americans. After the American Revolution, a Spanish land grant gave a British Loyalist, John Russell, the acreage that later became Blake/South Daytona, and in those days this land rich with live oak logging was both lucrative and essential to national defense. In 1812, when the Blake area was still a territory of Spain (1783-1821), Russell purchased a small gunship, the Barbarita, to be used by the Spanish government against American privateers who were capturing cargo and Spanish ships between St. Augustine and the Halifax River, but in August 1812 the Barbarita itself was captured by the American Captain Leveley of the Nonesuch, a large schooner with ten 12-caliber cannons and two 8-pounders with a crew of 100. This is an example of how vital live oak trees were to shipbuilding and to the commerce of America and other nations. The Big Tree of Blake was somehow spared (McLaughlin; Cusick 225, 228).

Then nearly 100 years later, almost three decades after the Blake community had formed, the Daytona Daily News reported, “Many of the older settlers here have stood in the branches of this famous old tree and from that point of vantage shot deer and bear,” and in 1904 after the “casino” was built high in the tree’s huge branches, tourists would stop by and climb to the platform to view the beauty of the landscape; and by 1905, Daytonan auto garage owner J. C. Pettepher was chartering his 10-horse power Union automobiles for three-hour 32-mile roundtrip tours with a stop at the Big Tree as part of the trip from Daytona to Port Orange and New Smyrna with other stops at a pineapple farm and the New Smyrna sugar mill ruins which had just been discovered the previous year. Big Tree was touted in the 1905 Daytona newspaper as “the largest tree probably in the state” (“Big Tree”; Atwell and Clarida 38; “Some Fine”).

Picnics under the shade of the Big Tree were quite popular; and more ceremoniously, in 1909, the Order of the Eastern Star celebrated St. John’s Day at the site. This fraternal group, patterned after the Masons, included both women and men who were prompted to “noble deeds” (McLaughlin; “Order”).

Though that was more than a hundred years ago, as late as 1987, Daytonan Clare Sammis recalled her childhood memories of the tree, which matched their family photographs of her mother and grandmother on a bench on the dancing platform high up in the tree (Graham, “Dances”).

How to Locate Where the Big Tree Stood

Blake’s Halifax Avenue (or “Big Tree Road,” as it was typically called) which began as a trail to bring oak to the banks of the Halifax River was eventually lined on both sides with fig trees and spacious orange groves, but looming above them all was the massive live oak known as Big Tree which was spared the saws of loggers, and it also survived the widening of this logging road after Henry Flagler’s railroad came to Blake. Railroad maps of 1895 and 1897 do not include Blake as a train stop, but the name of Blake does appear on an 1898 map [to view it, click here] (McLaughlin; Wright; “Volusia”).

Thirty-nine years ago, in 1975, local historians Harold and Priscilla Cardwell retraced identifiable portions of the Old King’s Road as it traversed Blake/South Daytona, and they noted that in traveling from the Port Orange area into South Daytona, “We head north by McIntyre’s saw mill, passing by the Craig place, then crossing present-day Madeline Street east of Clyde Morris Boulevard on the Hickman place, crossing Big Tree Road east of the cemetery. In order to go to Daytona from Blake (South Daytona) settlers used Big Tree Road via Old King’s Road to go to Daytona and northward for their provisions.” Locals and other travelers on Old King’s Road could take a short side trip to see the Big Tree, and those walking or riding on Big Tree Road could probably spot the top of the giant tree from the road (Cardwell, “Old King’s” 19).

The legendary tree stood near the entrance of today’s Palm Grove subdivision, and Brian McLaughlin’s research has discovered that the Big Tree stood in the Leach Brothers’ orange grove of Blake, specifically in Plot 106, which he has identified in a July 1877 map of the town. That location, McLaughlin notes, may be more easily identifiable for us today by starting at the Jiffy Food Store at 901 Big Tree Road on the corner with Magnolia Avenue in South Daytona. That convenience store is on Plot 108. To the west of it on the south side of Big Tree Road are the Oak Meadows Apartments which are in Plot 107. Plot 106 would be the land immediately to the west of the apartments. Local historian Priscilla Cardwell recently explained that another local historian, Hazel Fenty, said that the Big Tree was on the south side of Big Tree Road, accessible in the 1920’s by going through a fence and walking south “to the back” of the lot. Cardwell also noted, “The owners of the property never lived on the property. They lived on Ridgewood.” McLaughlin’s research has also revealed that in 1926 that area was platted to become a residential subdivision, but likely because of the land bust those homes were never built. That was also the year, McLaughlin indicated, that the official name of the road, Halifax Avenue, was changed to Big Tree Road because the newly consolidated Daytona Beach already had its own Halifax Avenue (Atwell and Clarida 38; McLaughlin; Cardwell).

The Legacy of the Big Tree

Local historians Cheryl Atwell and Vince Clarida note that the Big Tree was weakened by disease and finally succumbed to a fire in October 1928 (Atwell and Clarida 38; Atwell 21).

For some years a recreational park in South Daytona at 980 Big Tree Road was named Big Tree Park, but McLaughlin’s research shows that the Big Tree itself was not actually on this 11-acre park now known as Blaine O’Neal Park which has a regulation-sized baseball field and a three-acre lake for public fishing of bass and bream (“Blaine”).

In March 2013, I spoke with Phil Trimachi, President of the South Daytona Historical Society, to suggest that a “legacy tree” could be planted, using an acorn from a tree growing near the area where the Big Tree had stood, and at the November meeting Phil announced that he and Gary Wandelt have plans in the works to plant a live oak as a living memorial to Blake’s historic Big Tree.

To write this, I used these sources:

Cusick, James G. The Other War of 1812: The Patriot War and the American Invasion of Spanish East Florida. Athens, Georgia: University of Georgia, 2007. On Google Books. http://books.google.com/books?id=BxHE3OsgU9EC&pg=PA228&lpg=PA228&dq=barbarita+ship&source=bl&ots=hA9lEeeuH1&sig=_ThjbbrrcVdwJrNvkqpJfgfPGLo&hl=en&sa=X&ei=nVVyU9SGHOvZ8AG_0oCAAw&ved=0CEAQ6AEwBg#v=onepage&q=barbarita%20ship&f=false (accessed May 13, 2014).

Thoughts about the Bible, doctrine, and faith

I'm Laura Yang and I am a portrait photographer based in Ormond Beach, Florida.

Discussing the history of Southeast Volusia County featuring the cities of New Smyrna Beach, Edgewater, Oak Hill, and others in the area.