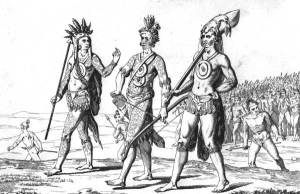 I realize that we’re all new to Florida when I remember that more than 2,000 years before King Tut ruled Egypt there were Paleo-Indians already living in Florida, using stone weapons to hunt Pleistocene-era animals, including “giant ground sloths, horses, bison, llamas, giant armadillos, and huge tortoises.” The Florida peninsula in those days was twice as wide as it is today because the sea was lowered by Ice Age glaciers that locked up frozen sea water in northern areas. This exposed more dry land making Florida wider, and by 4,000 B.C. after a global warming trend the Paleo-Indians were living in villages year-round along the St. Johns River. Some years later they were joined by people who spoke Timucua, and by 2,000 B.C. these Volusia residents were fashioning clay pottery made sturdy by using the plant fiber of Spanish moss (Ste. Claire 13-17).

Then 3,500 years later the Spanish came to Florida, and they encountered these long-time settlers who spoke Timucua, the predominant language, possibly dating back to 2,000 B.C. (Granberry 2). Timucua was the “Latin” or its day, much as English is now the language used by all commercial airlines; and the heritage of the Timucua language is perpetuated today in the name Tomoka (Timucua).

Locally, we know about the Timucuans because the site of their village Nocoroco is preserved in Tomoka State Park, just north of Ormond Beach. (Drive north in Ormond Beach on Beach Street [along the Halifax River]. Tomoka State Park is 4.3 miles north from the Granada Bridge [State Road 40].)

Spanish explorers described the Timucuans as being very tall with bodies covered by tattoos. In a later article I will look into the Timucuans’ lifestyle, their houses and forts, their foods, burial practices, and other interesting insights that archaeologists and historians have learned about them.

What the Timucua language was like is a mystery to me. I’ve read that there were at least eleven dialects, but differences were not very great, and according to Julian Granberry, an expert in the Tumucua language, linguists know very little about all but two of the Timucuan dialects. But one of them, Mocama, was used by two Spanish monks, Pareja and Movilla, when they wrote religious tracts for the Florida Native Americans in the Mocama dialect of Timucua (Granberry 6-7).

The Timucua language was already ancient by that time, but originally, according to Granberry, the “Timucua language, culture, and people were intrusive to Florida,” yet it was a “slow and gradual hybridization of the indigenous non-Timucuan peoples.” He says archaeology and ethnohistoric data indicate that it was a “creolization process” which was greatest in the Alachua Prairies (around Gainesville); and Timucua was also spoken throughout the St. Johns River Valley (which includes Sanford, DeLand, Astor, Palatka, and Jacksonville) (Granberry xi-xi).

Of course, as I mentioned, the Timucuans were here in Volusia at Nocoroco (in Tomoka State Park).

Granberry says that the these Timucuans seem to have been “riverine traders” rather than “invaders and conquerors,” and during Archaic times these few in-coming Timucuans gradually changed the customs and language until Timucua eventually became the language spoken all the way from the Okefenokee Swamp in southeastern Georgia down the Atlantic coast of Florida to Daytona Beach. Timucua was also spoken across central Florida as far west as the Aucilla River (about 35 miles east of Tallahassee) and throughout central Florida from the Withlacoochee River (Polk County) to Cape Canaveral (Granberry xi, xii, 1).

Timucuans maintained loose tribal units with separate tribes in their own regions, such as in Volusia, St. Augustine, and other areas.  From the Daytona Beach area extending (toward DeLand) to the east bank of the St. Johns River were the Timucuan tribe known as the Agua Dulce (Sweet Water), and their dialect is known as Agua Fresca (Fresh Water).  From St. Augustine up to the south bank of the St. Mary’s River (north of Jacksonville) were the coastal Timucuan tribe known as the Saturiwa, and their dialect is known as Agua Salada (Salt Water). Other tribes were in these regions: Lake County and Orlando (the Acuera),  Ocala (the Ocale), Gainesville (the Potano), the Lake City area (the Utina), as well as many other Timucuan tribes (Granberry 6).

According to Granberry, Timucua-speaking Native Americans retreated to the protection of the Spanish at St. Augustine to withdraw from the northern incursions of Muskogees and Anglo-Americans, and many converted to Christianity and assimilated into the Florida Spanish culture. Archaeologist and historian Dana Ste. Claire notes that conversions may also have been forced, and many were enslaved or used for forced labor (Ste. Claire 10). Timucuans hunted deer and other game which they traded with the Spanish, and the produce of the Timucuans plantings, especially of maize (corn), sustained St. Augustine. Timucuans, however, had lived for centuries without contact with livestock and the diseases that livestock shared with their Europeans owners, so the Timucuans had no immunity to European diseases, especially measles, which killed many Timucuans. By 1763 their population was diminished so much that when the Spanish released control of Florida to the British, only a remnant of Timucuans were moved to Cuba (Granberry 2), and it was after this evacuation that the Creek and Seminoles began to move into Florida. (Many people today mistakenly think that Seminoles have lived in Florida since antiquity, but the timeline is put into perspective for me when I realize that the Seminoles were not in Florida until after Blackbeard the Pirate, and after Handel’s Messiah with its “Hallelujah” chorus had been performed for several years. Also, before the Seminoles arrived in Florida Peter the Great had abolished slavery in Russia, and Charles and John Wesley had been preaching Methodism for many years, and America’s First Great Awakening had already occurred. With this in mind, I realize that the Seminoles are like us–newcomers to Florida.)

The Timucuans who were moved by the Spanish to Cuba formed the settlement still called today Ceibamocha, which means “by the Ceiba tree speaking place.” “Mo + cha” means “speaking place,” and it is part of the names of other Timucuan towns, for example, Utinamocha(ra), which means “Speaking Place of the Lord of the Land.” According to Granberry, the Timucuans in Cuba “merged with the general population” (Granberry 3).

As I mentioned earlier, the memory of the Timucuans and their language lives on in the name of the Tomoka River, and their Nocoroco village site is preserved for us today in Tomoka State Park.

To write this I used these sources:

2 thoughts on “Timucua “Indians” of Volusia, Their Timucua Language, and What Became of Them”

Thoughts about the Bible, doctrine, and faith

This is a forum for invitation-only literature groups who meet in Ormond Beach, Florida.

I'm Laura Yang and I am a portrait photographer based in Ormond Beach, Florida.

Discussing the history of Southeast Volusia County featuring the cities of New Smyrna Beach, Edgewater, Oak Hill, and others in the area.